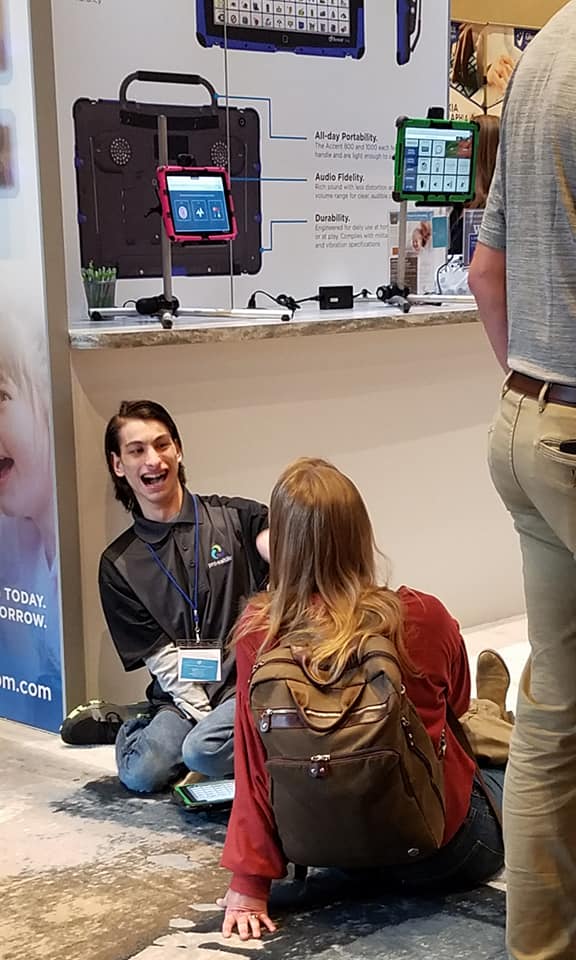 When we left Missouri the weather was 86 degrees and sunny, but when we arrived in Minnesota it was 46 degrees and raining.  What a difference!

Our shuttle didn't arrive to pick us up from the airport until an hour and a half after our flight landed.  We watched lots of people running here to there.  When the van arrived, it had the coolest chair lift.  It lifted me and my stroller onto the van, but my dad helped me to sit in a regular van seat.  It didn't take long for the driver to load our stuff and off we went towards the hotel.  Not only was the weather very chilly, but I also froze on the shuttle because the driver had the ac full blast.  Even with my mom sitting close to me, covering me with her jacket, my teeth were chattering.  Then before long, I could see through the pouring down rain a gigantic building with red letters that lit up the sky.

It read “Mystic Lake.”  The driver kindly drove us close to the building.  After quickly getting out of the van, we ran into the hotel.  What a fancy hotel!  As my dad checked us in, I couldn’t help but notice all of the bright flashing lights of the casino.

We didn’t go to our room right away instead we went to where the conference was being held.  And then after we walk for what seemed like miles, we arrived at the conference registration area.  Even though the conference was over for the day, I was still able to register.  Then we headed back towards our room, but we were getting pretty hungry.  The hotel had several restaurants.  It took us quite a while to decide where to go, but we decided to try “The Buffet.”  And wow, what a fancy and expensive place that was!

The morning came early, but I was anxious to get to the booth.  When we entered the vendor hall there were hundreds of booths, and I thought, “How am I going to find PRC?”  But it wasn’t hard at all.  I saw the PRC/Saltillo banner higher than anyone else’s.  As soon as Gretchen Bright saw me, she called me over.  She introduced me to her friend, Chris Klein.  Chris uses a communication device like me, except he uses his toes to operate it!  I had never met anyone else that used an AAC device before.  The opportunity to meet another person that uses an AAC device was exciting, but then I met two more people using AAC devices. Their names were Krista and Chloe. We all talked to one another a little before the doors opened and crowds of people burst in.

Once I was settled in at the booth, my dad decided to walk to a nearby grocery store to buy us food for our stay since the prices at the hotel restaurants were so expensive.  That turned out not to be a very good idea.  Since we were staying on a reservation, the closest grocery store was a mile away.  Plus, it was cold and rainy.  And lastly, the grocery store was a health food store that was filled with items that we were not used to buying. But my dad made it work even though he wasn’t feeling very well.

He started feeling bad on the plane.  And by the second day, my dad was not feeling very good at all.  There weren’t any Urgent Care clinics within walking distance of the hotel.  So he called our doctor at home.  She sent a script to Walgreens.  So my dad walked 5.2 miles to get his medicine.

My poor dad wasn’t having a very good day, yet I was having an amazing time talking to people about my device and handing out pens.  I made several friends with people that stopped by our booth.  While my dad laid in the hotel room recovering from his marathon, Gretchen and I were having a wonderful time.  She and I were taking selfies.  She, also, helped me to create some new buttons on my device.  I loved being there in the booth, meeting people, and handing out pens.

When I registered for the conference, I was given a coupon to use in the casino.  The chance to play a slot game was a temptation for me ever since we first entered the hotel.  Then on our last day, my dad and I went to redeem the coupon.  I was excited when I found a slot game with a lever.  All of the other ones had a button to push.  It was fun to pull the lever, watch the spinning slots, and see where they all land.  I even won $89, but I lost it all except for 6 cents.  Plus, I was able to enjoy a free root beer while I was there.  But while I was having a lot of fun, I couldn’t help to notice not everyone was feeling the same.  Not everyone seemed happy.  There were many serious looking people just sitting and playing games.  It seemed like they were robots.  They kept pushing buttons without any joy or delight about playing.  It was kind of sad to me.

I never did go to the Mall of America, but that was okay!  I did go swimming and meet several people from Minnesota.  After getting home, I went straight to bed.  I was worn out.  I had never been happier to be back in Eldon and to see our cat, Alfredo.  At the same time, I feel blessed to have such an amazing job in which I can tell others about a device that has given me a voice to express my thoughts, ideas, and my emotions to the world.  I had fun going to Minnesota, but it was too gloomy for me.