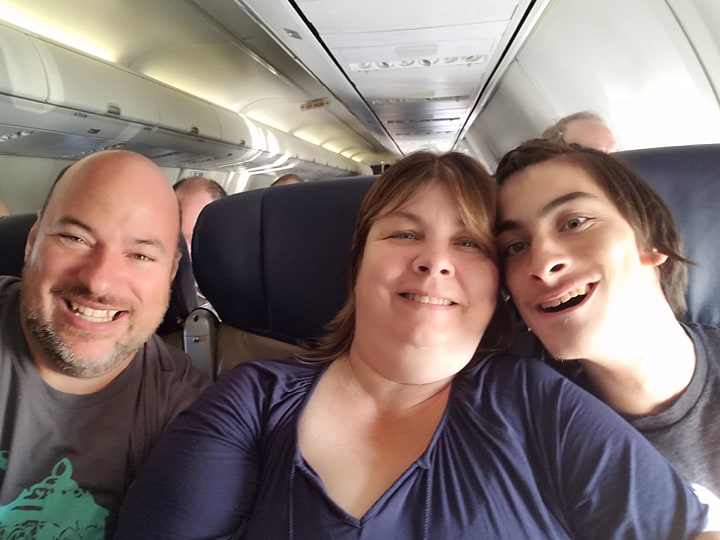 As I watched white, fluffy clouds floating by from my airplane window, I rehashed my whole adventure from the past week. Gretchen Bright had asked me if I would work at PRC’s booth in Minnesota for the “Closing the Gap” Conference.  I have never been to Minnesota before, but I said Yes! We got the plane tickets and headed off.  The St. Louis airport was huge and we almost got lost in all the people.  First we got our boarding passes and bags checked. But after this, I had to be frisked by a man. Ya, if you are in a wheelchair, you get frisked down. I passed the frisking, the wheel-chair checks, and finally got on the plane.

I found my seat next to a window, and my dad sat beside me with mom on the aisle seat. Then I turned on my Accent, opened a notebook and started reflecting about everything that was happening.  The only problem is my dad was sandwiched between us. He started to sweat a lot, and get claustrophobic! My mom noticed that there was something wrong and she switched seats with him.

As soon as I began to reflect about our adventure at the airport, we were landing in Minnesota.  It was an unbelievable short flight!  I was speechless at what I saw! There were beautiful trees and houses before the whole plane suddenly plummeted straight down. I almost screamed out! When my heart stopped pounding, I slowly realized that we were in Minnesota! We stepped out of the plane and walked around in the terminal. We picked up our luggage, but didn’t know where our ride for the conference was at. It would have been nice if the conference could have picked us up, but no! We learned that our bus driver thought that our plane was landing at 4:30 and we had been delayed. We called him, and ended up waiting 1 ½ hours for the shuttle to arrive.

Minneapolis was cold, dark and rainy.  We’re not in Missouri anymore Toto!  In the middle of all of this drama, my dad’s sinuses suddenly awakened. He was a sneezing mess, but that didn’t stop there as you will soon see! The driver finally arrived.  With his apologies for being late, he drove us to the casino where our adventure were just beginning. This is Life with Kyle and I will talk to you next week with the continuation of this saga.