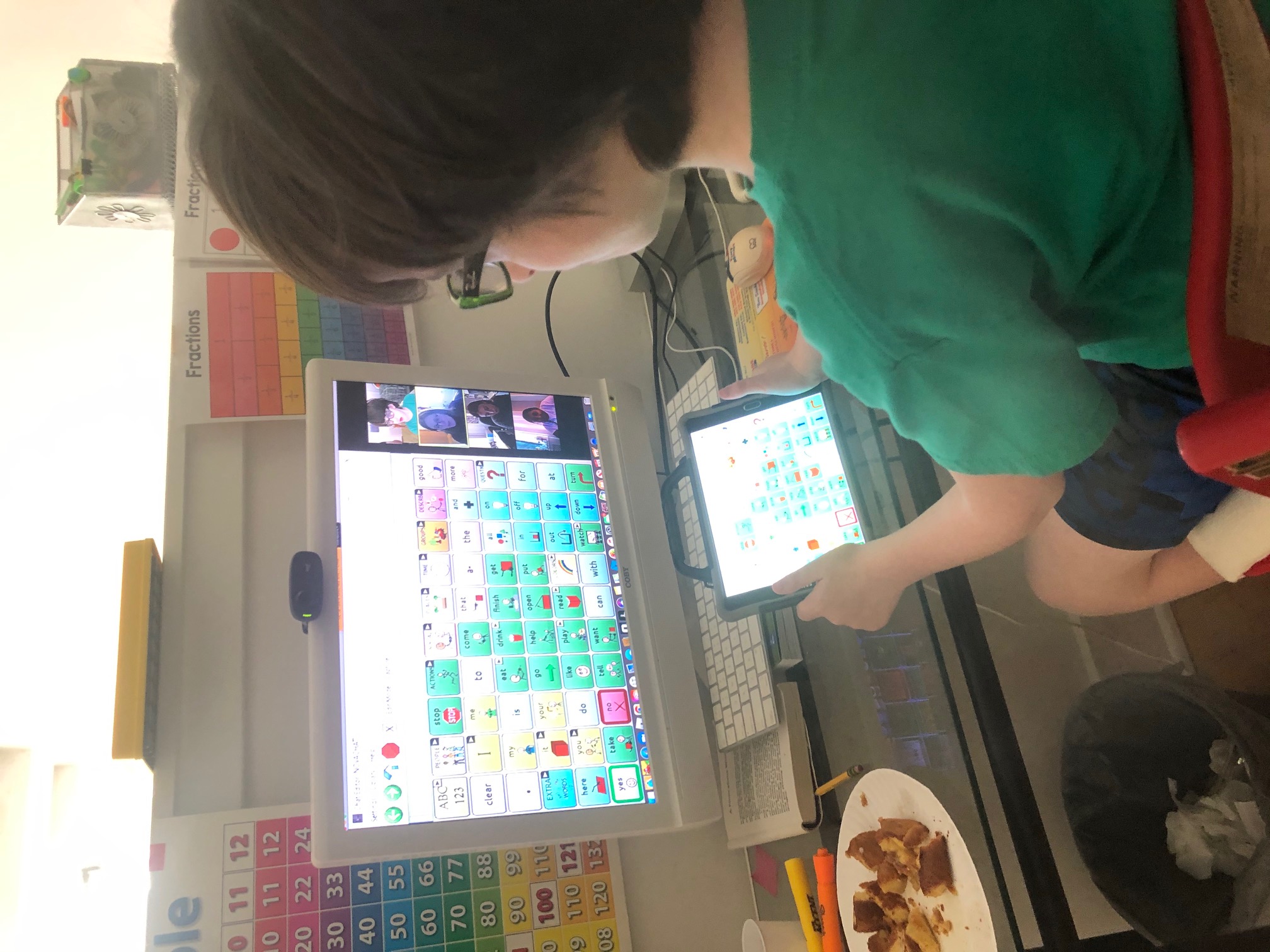 Virtually Impossible Possible
A High-Tech, High-Touch Approach to AAC in the Age of COVID:
How one school-based SLP conquered challenges with a ‘hard drive’ and determination

It was Friday the 13th. Speciﬁcally, March 13th, 2020—a cold and blustery Philly day and I was halfway home on foot at the early afternoon hour of 2:00 p.m. I stopped in my tracks. Oh no! I left my iPhone on my desk at work. Instant panic set in. Will I be able to reenter the oﬃce building? Would my phone—my lifeline—still be there? What if I was not permitted to get back in for a week, a month, six months? Yikes! What would I do? People were scurrying about on the city streets carrying large boxes and bags as if a tornado was coming. Faces were serious. Heads were down. There was crazy traﬃc. Angry horns honked.

Worry escalated in my resourceful, yet fragile mind. I sweet-talked the lobby security guard and he allowed me upstairs. Whew! I grabbed my smart phone as if it was my ﬁrst-born out of raging river. At that point, I became acutely aware how important technology was to me. And speaking of my ﬁrst-born, panic saw its second wave when I realized that each day, my son, Brody (10) walks around with about $4,500 of technology each day. My next stop was to pick him up. There was no playbook for this.

It was Bill Gates who said: “The advance of technology is based on making it ﬁt in so that you don't really even notice it, so it's part of everyday life.” This rang true in 2020 like never before. These days, I ﬁnd myself frequently using three devices at once these days—an iPad, iPhone and desktop all at once, multi-tasking like a maniac. This trifecta of tech allows me to move through my day faster, communicate more eﬃciently and also helps me keep track of minutes and hours. As a Gen-Xer, I’m proud of my pixel prowess. I’m also proud of Brody’s adoption of and acclamation to devices that provide a better quality of life (AAC device, hearing aids, FM System).

2:30 p.m. I ran to Brody’s school to pick him up. I grabbed his “talker” (Saltillo’s NovaChat 8), an FM-System and hearing aid care kit as I cleared out his cubby. At that point, the school nurse tapped me on the shoulder with a big red bottle that contained ADHD medicine and said “You should take the rest of this home in the event that we don’t return to school.” What? What was she talking about…the rest of the day, the week? What? I was confused. Was the world ending?

I’m a mama bear with fangs that occasionally make an appearance— a self-proclaimed warrior and a relentless, make-no-apologies, A+ advocate. I’m involved, proactive and in the 10-steps-ahead camp. When we got home that day, Brody and I watched TV and learned about COVID-19. CNN’s Anderson Cooper had a stern look on his face. It became obvious that Philadelphia, and possibly the US, was on its way to shifting to a virtual learning model. Um, what? In a matter of a month or so, we were immersed in what seemed like a scenario out of a low-budget, science-ﬁction ﬂick. And let’s just say that during the Tiger King craze, I was feeling surprisingly sheepish.

When the dust settled a bit and I was able to wrap half my head around the enormity of the pandemic situation, and its potential impact on elementary school distance learning, I realized that Brody’s reliance on his talker was akin to my daily dependency on the iPhone. It was important to him. It helped him augment his vocabulary so that he could be understood in the world. When he couldn’t get the words out (due to Childhood Apraxia of Speech), he leaned into this technology to avoid frustration.

In the new digital realm of everyday learning and therapy via computer screen, I felt a bit forlorned. Brody’s amazing, school-based SLP, Sonya was constantly modeling language for him on his NovaChat 8. She helped him navigate menu drill-downs enabling him to successfully and quickly locate words—admittedly a skill that I had not yet mastered. They typically sat in close proximity (never 6-feet apart, as Brody also has bi-lateral hearing loss), side-by-side or facing each other as Brody learned to conﬁdently lean into the device to help mitigate frustration. Now that the world had changed, and schools in Philadelphia were fully remote (and still are). Brody learned best in an intimate, one-to-one setting. He was also combatting ADHD. My heart sank. I tried to imagine how a continuum of speech therapy could be possible remotely. But then I took a deep breath and realized that Brody’s school-based SLP was none other than Sonya Brintnall. Suddenly my white knuckles returned to a normal state.

For Sonya, speech language pathology was surprisingly an inadvertent career. With a background in the humanities and interdisciplinary studies she searched for a career that combined scientiﬁc knowledge with creative freedom.

Sonya’s father is an Anthropologist so at a very young age she was exposed to a multitude of new languages and diverse cultures. She developed a passion for language learning when she lived abroad in Germany for a year. She felt a palpable calling to support communication between people during her younger years— reaching out to friends and family with hopes of facilitating better communication and understanding. The family joke was that Sonya was 6 going on 60.

After working for a few years at a local newspaper in Eugene, Oregon she began coursework at University of Oregon, exploring careers in Teaching and school-based Psychology. Both occupational paths didn't seem to ﬁt her inner-yearnings. One day, a family member prodded,
“Hey, what about Speech-Language Pathology?" She had never heard of the ﬁeld! After doing a bit of research, she took her ﬁrst course on Neurogenic Communication disorders and was completely hooked! She had ﬁnally found an ideal career that would inevitably inspire, motivate, and challenge her (and subsequently others) moving forward. She relished the juxtaposition of scientiﬁc data and artful methodologies and was on a ﬁerce mission to improve communication. The rest is history. Incidentally

“…If there’s one thing you should know about me, it’s that I don’t give up easily,” said Sonya after I voiced my distance-learning concerns like one of Bravo’s crazed “Housewives of New York.” Sonya is somewhat of an introvert, quiet, patient, lovely and sensitive. But when it matters, she’s a powerhouse and will stop at nothing when pursuing a particular outcome.

Back in September, 2020, following a Zoom meeting with a very helpful Rachel Smitheman, Saltillo Assistive Technology Consultant (MD, DE, and SouthEastern PA), we hatched a plan to optimize real-time modeling on Brody’s AAC via the Zoom platform. Each year, Brody’s team meets with Rachel to make sure we’re all up to date with his “talker” and how to use it speciﬁcally for his needs. The year 2020 was in a word— overwhelming. Thank goodness Rachel was able to be the North Star that we needed. She taught us what we needed to do to make all of the technology work seamlessly. Sonya was like an AAC superhero during this time. She followed Rachel’s instructions to a T, despite some bumps in the road.Like most educators, Sonya only owned an Apple computer. She checked available resources with The School District of Philadelphia and found a potential shared loaner. She also had the option to wait until the District purchased a new computer. She decided to check her own resources within her community as she wanted to exhaust her possibilities ﬁrst. That was our ﬁrst roadblock as step one was to install Chat Editor software. To be honest, many people would have given up there. Not Sonya. She reached out to her empathetic West Philly neighbor, Tony. He was known to tinker around with tech. Once she secured Tony’s donated PC, she downloaded the necessary Chat Editor software from the Saltillo website. Sonya had another child that also used this device, so she taught herself how to dig in to the tech for both students. Sonya borrowed Brody’s device on two separate occasions to back up his customized version (his vocabulary) onto the PC. We had a couple glitches during this process, but that didn’t deter Sonya from becoming an overnight expert. She did lean on Saltillo’s Tech Support Line (for many hours).

“A lot of it was trial and error,” admitted Sonya. “It took me a while to acclimate to the ﬂow of modeling, questioning, teaching, checking and just interacting by video conference. It’s sort of like being a detective. It feels great when you crack a case”

I’ve always said that technology is all about the people who use it — not about the technology itself. I feel so lucky that my son has such an amazing and caring person as his SLP. She went the extra mile and just kept on going. Let’s be honest. She really didn’t HAVE to do what she did. She didn’t have to put in the late nights and extra time to ﬁgure out how to best tech Brody remotely. She could have charged me with that initiative. Her compassion and her tenacity are attributes that make her an exceptional person.

Sonya Brintnall, is indisputably a human representation of that brave light.

Watch Brody with his device  -