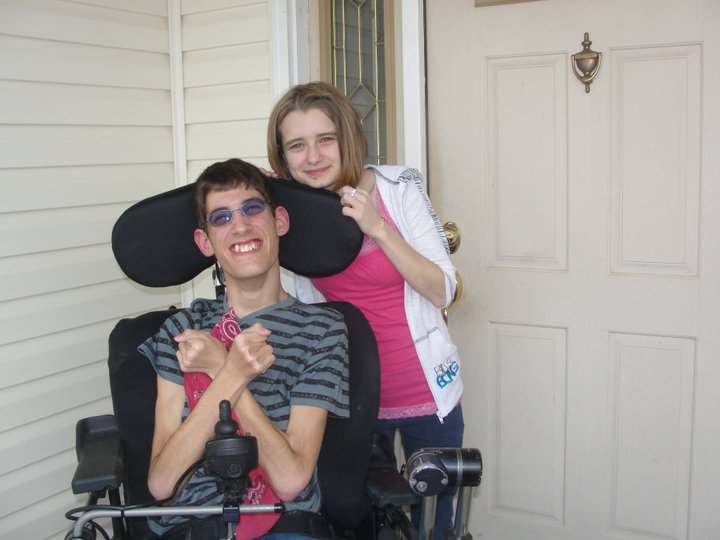 My name is Scott Scherer. I am 23 years old and go to college at Ivy Tech

I would like to tell you about my experience using a communication device. I have been using a device to help me talk since I was about 6 or 7 years old. The technical word for it is a Speech Generating Device or SGD. Some people call it their “talker.”

Julie Huff was my speech therapist when I was at Kids Connection. She used flash cards and I would tell her the names of the flash cards that she would hold up. On Fridays, we used to play a game with words called “Dump Truck City.” It was a table game. Every time I won, I would dump a word on the table using a toy dump truck.

My first device was called the Liberator. It was made by Prentke Romich Company (PRC) and cost about $10,000. I attended preschool and received therapy at Kids Connection on Greenbush Street in Lafayette. The Lafayette Barbershop Quartet helped raise the money to pay for the Liberator. I have had two other devices since then, the Pathfinder and now the Eco2. It is pronounced like the word “echo.” With each new version, the device has improved.

I can use the Eco2 to open Microsoft Word documents, internet pages, Skype, upload videos on YouTube, and e-mail. I have several e-mail accounts such as AOL, G mail and M.S.N. to handle spam.

My favorite old feature on the Liberator that disappeared with the upgrade was the music feature. You could make sounds like tones on a keyboard. I could finally say full sentences. It was hard to form full sentences with my mouth. When I got the Pathfinder in seventh grade, I was attending East Tipp. I could now do word prediction. That improved my spelling a little bit. I had a fun time at East Tipp. I used my Pathfinder to practice my icons. Icons are pictures that categorize groups of words. Examples would be an apple for “food” words and a truck for “traveling” words

I got my Eco2 about two years ago near my birthday. It hasn’t been perfect but no electronic device is. I have had to send it in for repair once because the USB plug broke off and remained inside the device.

Jabberwocky. Yes, that is a real word, but it refers to a mythical flying dragon. It is also the name of a camp that happens every summer on Martha’s Vineyard in Massachusetts. It is for people with any kind of a disability. I first went in 2001 when I was eight and one half years old. I have been to Camp Jabberwocky every year since and stay for four weeks. Most people only get to stay for two weeks. The camp is always over staffed because there are so many volunteers and interns. This past year was our 60th Anniversary. We had a celebration with music and lots of old pictures from years past. I have several friends there and Jonah was one of my very best friends. He passed away in 2011. I had known Jonah since my daycare days. I Skyped a lot with Jonah. He liked to boss people around. He used so much bad language that it seemed like every other word! He got thrown out of camp because his language was that bad. I still liked him. He had a good personality. I will be back at Camp Jabberwocky on June 24 next summer! There is always a form on the Camp Jabberwocky website if you want to attend or volunteer.

I have a dog, and her name is Mika. That is German for Michelle. I also have a brother named Andy. He likes to play video games 24/7. My mom is nice and I love her. I love her cooking, especially her desserts. My father takes me everywhere, like Purdue volleyball games and Columbian Park. My friend Matt helps me with homework and takes me on long, long walks.

Whatever problem or difficulty your student may be having, be very patient and do not scold them. Encourage and support all of your students, especially if they are down on themselves. At times when I get upset and frustrated, I tend to say bad things about myself. Some things that frustrate me include things not working on my device, or when people guess at what I’m saying instead of repeating what they heard or understood. It is a good strategy for the listener to repeat what they understood so that I don’t have to repeat the entire sentence. I can then focus on the part they misunderstood. I also get frustrated with the slow internet service at home. It’s DSL, so it loads at a snail’s pace. The company has promised fiberoptic cable, but we haven’t gotten it yet. I like to do as much work as possible at school because the internet is faster.

Another thing that frustrates me is when my schedule is messed up. My brain doesn’t like it. As a teacher you can help me when I get frustrated by being supportive, instead of saying “Well, we can’t do anything about it. The schedule is what is.” Try to tell me ahead of time and be more empathetic.

At Harrison, when we have “Activity Periods,” we have extended time during second hour. Since I know about this schedule change, I learned how to deal with it. The first time it happened, nobody told me and I kind of freaked out. When my device isn’t working properly, my helper can try to call tech support. This helps me feel better when I hear from a reliable source about what’s going on with my device since they made it.

When people don’t understand me, it can be difficult to get my words out. Then the frustration can make my speech even less clear to the listener. However, just because I can not speak clearly or use my hands doesn’t mean I don’t know what I’m talking about. When you face a problem with the device, don’t hesitate to call Prentke Romich or find somebody that can assist or that likes to solve problems. Determine the student’s range of motion (ROM) and find the best spot to reach all of the buttons. I have to move my arm rest to enable me to select icons on the bottom of my device.

Be patient, because it took me a long time to learn the Unity system. This means I couldn’t make sentences quickly. I knew what I wanted to say but couldn’t program the words. I explain to people that my Echo2 has pictures or icons and each icon represents a category. That picture can be used as a single word or icon where a lot of other words can be stored. Using these pictures and icons help me communicate faster because I don’t have to type out each word. When I do have to type out each word it takes me five minutes to write one sentence, especially if I don’t know where the icon is stored. Word prediction helps, but I’m not the best speller.