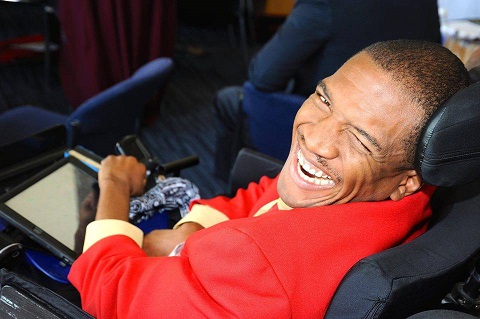 This summer I had a great opportunity to be a Storytelling Fellowship with Making Contact, which is a National Radio Program that plays on NPR and Pacifica Radio. During my fellowship with Making Contact I was tasked with producing a radio segment on the Augmentative Alternative Communication or A.A.C. Community. In the segment I specifically focused on how the voices of people who use A.A.C. are received in society.

Working with Making Contact was an exciting and wonderful learning experience. The radio producer that I worked with, George Lavender, was amazing in directing me in the process of creating the radio segment from conducting the interviews I needed to record to assisting me with editing all the different drafts of the script until we had the final one that we recorded as the segment. By the end of the fellowship we were able to produce a segment that will have wide appeal to many people.

I was fortunate to interview four people that were either people who use A.A.C. or worked in the A.A.C. field: Dr. Samuel Sennott, April Bryant, Dr. Sarah Blackstone, and Dr. Bob Segalman.

Dr. Sennott is a professor at Portland State University and is the co-creator of the A.A.C. app, Proloquo2Go. In our interview I mostly discussed with him the new innovation with technology in the A.A.C. field. He addressed the trend in the A.A.C. technological field to move to more natural voices in A.A.C. devices. He described how in developing Proloquo2Go he worked with Acapella voices so the program will have natural sounding voices for the users to choose from and he mentioned the work the company, Vocalid, is doing to make sure people who use A.A.C. have voices that sound like them.

In my April Bryant interview I conversed with her about her interaction with community while she uses A.A.C. and her relationship with her A.A.C. device. April gave me some good quotes of how she asserts herself and makes people address her like when she goes into the department store.

With Dr. Sarah Blackstone I discussed her extensive years working as a pioneer in the A.A.C. field as a speech language pathologist and what inspired her to work with people who use A.A.C.

With the Dr. Bob Segalman interview I discussed with him his successful career receiving two doctorates while having severe cerebral palsy and the program he developed to assist people who has severe speech disabilities to use the phone entitled Speech to Speech.

As part of my Making Contact Storytelling Fellowship I wrote a blog documenting my progress with the radio project. Under the direction of Kwan Booth, the Social Media Producer of Making Contact, I was able to produce a series of blogs to help promote my radio segment. Some of the subjects for the blogs were how the politics of speaking with an automated voice affects a person who uses A.A.C., why people who use A.A.C. are so under represented in the media, and video and audio recordings of my poetry. 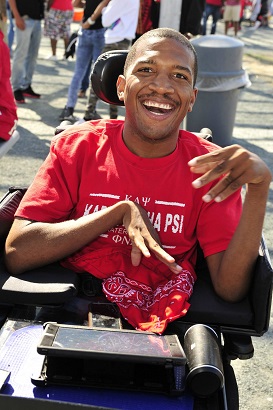 I was able to grab people’s interests with these blogs and make them look forward in anticipation to the radio segment. The most popular blog post was entitled “The Ten A.A.C. Commandments”, which was a song I recorded on Soundcloud as a spoof on The Notorious B.I.G.’s classic song. In the song I lay out the ten rules that any person who uses A.A.C. should know to be a successful communicator. I encourage everyone to listen to the song when they get a chance.

I am definitely excited for people to hear my radio segment with Making Contact in October. People listening will definitely obtain more knowledge on how people who A.A.C. define ourselves and how we interact with society. For more information about my radio segment please visit the Making Contact website at www.radioproject.com. I hope people will be able to listen in.