Kyleigh Kramlich Inspires and Teaches Others 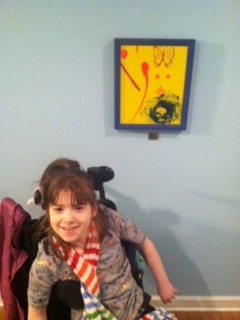 For twelve-year-old Kyleigh Kramlich, it was more than an honor to lead the flag ceremony for her Girl Scout troop and recite the Pledge of Allegiance and Girl Scout promise – these were personal accomplishments of a very unique kind.

Diagnosed at age two with hypoxic-ischemic encephalopathy (HIE) and dystonia, Kyleigh must contend with a number of physical and speech challenges in her everyday life. She uses a wheelchair and requires “complete assistance for everything: feeding, getting dressed, opening a book, etc.,” says her mother Christine Kramlich.

Verbal communication is also very difficult. “Her speech has improved over time and so she can communicate verbally some basic things like when she’s hungry or say things like ‘thank you,’ but to communicate anything more specific, like what she did at school that day, she needs her AAC device,” Christine explains.

“In school, her device has allowed her access to the regular education environment,” explains Christine. “Without it, people would assume that she is not capable of learning. She has also met people, made friends, and lived a life much richer than would have been possible without it.”

Kyleigh’s ability to communicate with the Accent has forever changed her family’s life, Christine says. “We are able to learn about Kyleigh’s fears and address them. We’ve also been able to discover more of Kyleigh’s personality, her sense of humor, her hopes, and her dreams. This has allowed us to build a world around her that is full of things that make her happy and encourage her to push herself to her limits.”