Inclusion of AAC on the Playground

Playground AAC boards have swept social media over the past couple years. Core boards are so much easier to access and print in a variety of ways that AAC folks have been spreading them far and wide along with a message of inclusion. You can get a ready to go unit from PRC, you can print something at your local office store from most any non copyrighted image. But what if you want something that will last for years to come without fading? What if you want something that looks like it was always part of your playground? What if you want something that has some core, but also teaches about our voices being heard, no matter how they are shared? What if your most common vocabulary system used by your students was LAMP Words for Life, but you didn’t want to exclude other AAC? How can we reach people eager to know more? How can we pay for all of it? Well, that took me 2 years to figure out, help from a community group for funding and several friends and coworkers offering their help, but it has finally been accomplished. So here is the journey that this SLP embarked upon for this project. It wasn’t the fastest, easiest way, but the initial reaction has been amazing. Students with AAC had reactions of “my talker!” They naturally started showing peers how to say words with it. They got to be the role models! Peers talked about feeling happy or silly. The introduction has been a great way for students to celebrate being back together at school with joyful shared experiences.

1.  Customizing and vectorizing: After getting lost in online research about what exactly a vectorized file is (turns out its a file that you can shrink or expand without losing resolution), I still had no idea how to actually create one. It seemed I was going to have to create my image and pay someone to do the vectorizing. So I decided to work on what my playground board would look like. I went to LessonPix as they have a coreboard option and the ability to use PRC icons. I designed there and then added some additional credits and color by importing the pdf file into Adobe. Turns out, the PDF files you can save from LessonPix are already vectorized, eliminating what apparently is a lengthy process to convert a static image. If I hadn’t wanted to add some extra things to the file, I wouldn’t have even needed the AdobeAcrobatDC the school had loaded on my computer.

2.  Durability: VInyl signs and other mediums printed at a local office store degrade quickly with a range of a few months to a few years in durability. For all the work it seemed to take, we wanted something that would outlast commonly available options. Contacting a local shop rather than a big box store to facilitate preparing the graphic and completing all the techy pieces led us to ordering from a company called Fossil Graphics who could make a nature trail sign that is likely to last more than a decade, probably longer. They could even make it two sided. No need to worry about tearing, dents/chips, or immediate sun fading. The cost though? A whopping $1100 for a 2’ by 3’ board.

3.  Inclusivity: We didn’t want a sign that stood apart from the rest of the playground features, we wanted it to feel like just another part of the playground. All of our playgrounds have metal poles that are powder coated as part of every structure. This turned out to be the most difficult piece to assemble. We wound up finding a friend from a utility company with scrap metal who fabricated the poles and who even had another friend who donated the powder coating. We also had to find somewhere to get the extra durable clamps that were playground safety approved. This wound up having to be done through a playground equipment company. These had to be received before we could do the powder coating so that everything matched. In terms of content inclusivity, we used core and fringe from our most commonly used AAC devices, but also wanted to include other forms of communication and get kids thinking about ways we all communicate. So we designed a header as part of the lesson pix/Adobe core board that celebrated all voices and provided pictures of common signs as well as an alphabet board.

4.  Sharing: Though we tried to make the signs as self-directed as possible, our site administrator had the idea to add a QR code linking to a short tutorial introduction. The introduction video could also be played in classes at the school. We hope to share the video with our other local schools and our local special needs playground.

5.  Financing: With the multiple steps and amount of customization in this endeavor, funding was definitely a challenge. I had been seeing the playground boards pop up and kind of roughly thought about it, but hadn’t pursued. Apparently my special education administrators had also been hearing the buzz and we brainstormed how to get started. At the time, we were going to settle for the longest lasting locally available signs we could find and did not yet have any idea that fabricating the metal poles to match the existing equipment or vectorizing was going to be such a challenge. Then the pandemic hit. The funding we were going to use from the district vanished. Yet, somehow a local group that had been offering funding for mini grants for several years had their best year ever in doing virtual fundraisers. I applied for a $1500 grant which allowed me to not have to worry about everything being ordered through a purchase order and not having to justify the expense to the school board. This particular group (CAPS Atascadero) loves projects that are unique. Without them, we would have had to opt for a much lower quality sign and most likely would have wound up with a wooden frame to reduce cost as much as possible. 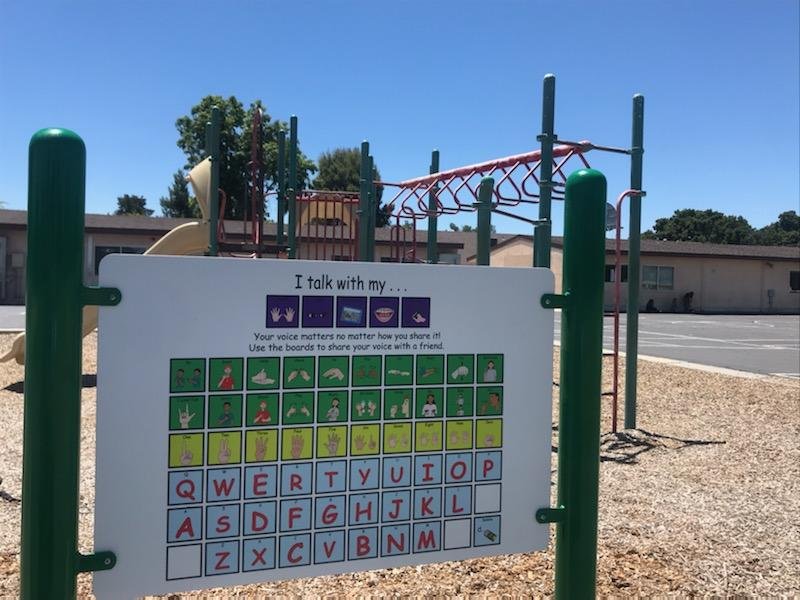 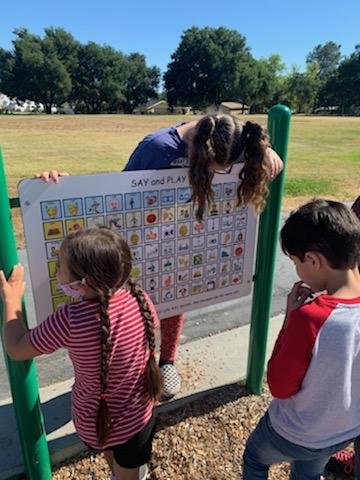