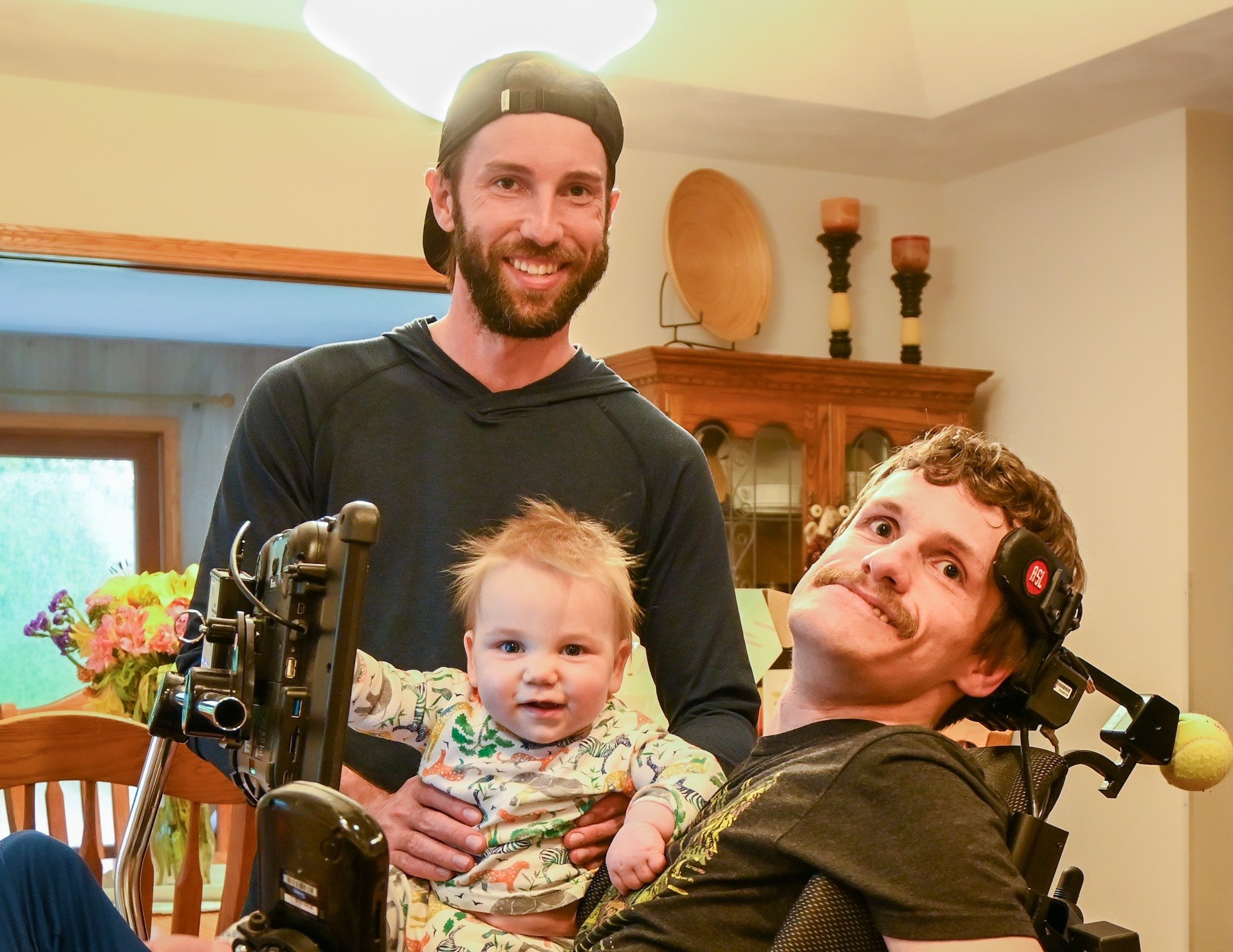 There are many false facts about the augmentative alternative communication community  that may interfere with students getting what they need.  One  AAC false fact that always bugs me as an AAC  communicator is all AAC Communicators have a cognitive disability. Mmm, this couldn't be more wrong.  Yes,  some do but there are a large number like me that do not . Google says 5.7% of students in public schools during the 2018-19 school year had a cognitive disability.  Sadly, when doing research for this paper, I couldn't find the percentage of students who use AAC in public  schools.

I would like you to think about that for one minute. Why aren't we keeping track of how many students use AAC or could benefit from using AAC in school? And what about the number of students in ID/CD programs. Are there any nonverbal  students in these programs who have not been evaluated for AAC or lack  a robust AAC program. I know that I can think of some of my friends who never got evaluated for AAC in their education  journey or they might have gotten evaluated once. Their teacher and their speech therapist might of said   "they can not use AAC, because their IQ is too low or have too many behaviors".

I would like you to meet Zach and Bob, our two characters in this  paper.  Zach and Bob are both 15, same school district, they both use the same device, but their education journeys are 100% different. How can this be? Let's go on the journey and see. First we will start with Bob's journey. He started kindergarten in 2007. Bob was in the CD classroom for the first four years of his schooling. Starting in fourth grade he was in a regular education classroom with an one on one aide. Bob took off with his communication. He watched his peers talk about their favorite TV shows and he wanted to get in the discussion. So he learned how to communicate and by the end of fourth grade he was up to five to seven words in a sentence. He  benefited from being in a regular education class and just hearing his classmates talk.. Bob made some great friendships when he was in elementary school.

Middle school starts in sixth grade so Bob needed to change his school. Bob's new school wanted him to be in a self enclosed classroom. They said  that it will be easier for him and he needs to work on life skills as he is not secondary school material.  Bob's parents believed the school. The next three years Bob's communication skills and social skills declined. He missed seeing his friends, he could only see his friends in art and music. At his transition meeting to highschool, the team told the new teacher Bob is a loner and has no close friends. His parents didn't know if he had friends or not.  They believed the school team. After the meeting a teenager was waiting outside to talk to the highschool teacher. The teenager said  excuse me please don't believe what the teachers told you about Bob, he is so smart and has friends. The teenager said he missed Bob in his class. The teacher thought about what the teenager said to him and he thought about it all summer long.

We will get back to Bob, it is time to tell you about Zach. Zach was in a special education classroom from kindergarten to second grade.  In third grade his school got a new special education teacher who believed in inclusion. Zach has had a communication device since kindergarten, but he never wants to use it because he has no one to talk to. Zach was using only one word sentence to communicate like juice and bathroom. Third grade brought some terrific changes for Zach. His new special education teacher wanted to try Zach in regular education class. To start, he was only doing reading and science, then they added math, and then social studies. By December Zach was in the regular class all day long and he was using two to four words in a sentence. He was learning right  along with the  regular class with typical kids. By the time the school year ended he was doing five to seven words in a sentence. His family and his aide couldn't believe the growth in one school year.

Throughout his grade school  years, he was always in his grade age classroom and Zach joined school clubs.  At Zach's transition meeting to middle school the special education teacher said to the middle school teacher and his parents. Do you have any learning disabilities classes or team teaching classes because I think that will work phenomenally for Zach? The middle school teacher said we don't have team teaching classes but I teach math and language arts in the learning disability program. Do you think Zach can be in a regular geography and science class with an aide or me always in there asked the middle school teacher? We would love to try that, said Zach's parents. So they have a plan and it worked super for three years. Zach loved his geography and history classes. He did okay in science with a lot of one on one help. For math and language arts he was in a pull out class, but when it was possible Zach joined  the regular classroom for these classes.

Now, this school district has only one highschool. Bob and Zach will be in the same school for the first time. The families know about one another, but the boys never met. Their special education teacher will be the same one that Zach had in fifth grade. After Bob's transition meeting, they had Zach's transition meeting the next week. After hearing everything that Zach did the last three years the teacher needed to think what he's going to do with the two students for the next year. The teacher asked his principal if it would  be okay for the two students to be in a mix of regular education, learning disability, and team teaching classes. The principal said sure. They had their problems in the first quarter, but they worked it out and had an amazing highschool journey  together.

Of course this story was made up but it has some truth to it and a lot of important points for us. I used my own life in some parts. The part when Zach was in regular science, geography and history was like me.  I was in those classes in middle school.  The part when they told Bob's highschool teacher that he had no friends, my middle school team neglected to share the names of kids I was close to.  So in high school I did not have any classmates that knew about me and my AAC device. The aides didn't have any idea who my friends were. We need to communicate better who the student's friends are. I feel strongly that a list of friends should be included in the  IEP, so the new team will know who the student talks to and eats lunch with.

The part where Zach was in pull out math and language arts but he could join the regular classroom, I had that in grade school and middle school. That worked great for me and I hope you think of doing that.  In my example  you could  see how many times  Zach and Bob change programs.  Sadly this is true for some students who have a communication disability. Throughout my education I was in all three placements at one time or another regular, mixed, and pulled  into a CD classroom for a class or two.  First impression of students that are nonverbal is they also have a cognitive disability.   This could not be more  wrong for so many students. I was in a CD program and an EBD program for my first eight years of my education. I used my behaviors to communicate.  The AAC device I had since first grade until fifth grade was not a good match for me.

Many  students who use AAC might have  a learning disability. Learning Disability is a condition giving rise to learning information or skill as related to a person their same age. That is what the dictionary says about learning disability, now here is what I am saying about  learning disability and how it impacted me. The learning disability classes are way smaller than the regular classes, 30 students in a regular education class to between 5 to 15 students in LD class, that is half of the students. Making it ideal for the students who use AAC. It impacted me  because I could take my time to answer, I felt good speaking in class, I could help my friends if they needed it, and we were all equal members of the class.  It feels like a family. Some people will say LD isn't inclusion and I will challenge them and here is why. We changed classrooms and teachers hourly, we had a good mix of students, and we were learning and reading the same books as everyone else in our grade. In highschool, I was in a regular history class and halfway through the year I wanted to change to the LD history class not because the work was too hard for me. Because I heard from all of my friends how fun the teacher was.

I want to finish this paper by telling you something. We can't see into a student's future to know what they will be like at 8, 14, 22, or 60. Our job as educators or their parents is to get them ready for their life. We don't know what they need to know. Yes, life skills are important to have, but AAC Communicators need to know some history, some science, a higher math level, and read some classic books. I will leave you with this. My IEP team could have easily checked the box to say Mike has a cognitive disability and is a behavioral problem and that is it. Their job would have been done, but it didn't happen that way. They and I worked our hardest to get me where I am today. You wouldn't be reading this if my first team checked that box to say yes Mike has a  cognitive disability too.

I run into a lot of families when I am speaking or volunteering and the first question I ask is are they in regular education classes? If the parent said yes then I celebrate with them because I know that student will have a better life. I  just met a family from Virginia.   who I just met live in Virginia. Their son is 12 and he is in middle school. He is using an Accent which is a communication device. He published a blog on Lessons From The Big Toe, a new website by Chris Klein. That blog article looked like a highschool student in a language arts did for their final paper, not someone who uses AAC and is 12. His school district, his family, and of course him has done an excellent job helping him become an amazing writer. So the next time you are doing an IEP take a few minutes to think about what impact you want to have on  that student and their family. It could change their life.

Mike Hipple is a 26 years old man who lives in Wisconsin. He is an AAC Communicator. He loves the field of assistive technology and special education / behavior. He is a member of Wisconsin Autism Society, Council on Exceptional Children,  USSAAC, and ISAAC. He founded Wisconsin AAC Network in 2015. When he isn't learning or writing about assistive technology, special education, and behaviors you can find him volunteering somewhere in his local community through Kiwanis.