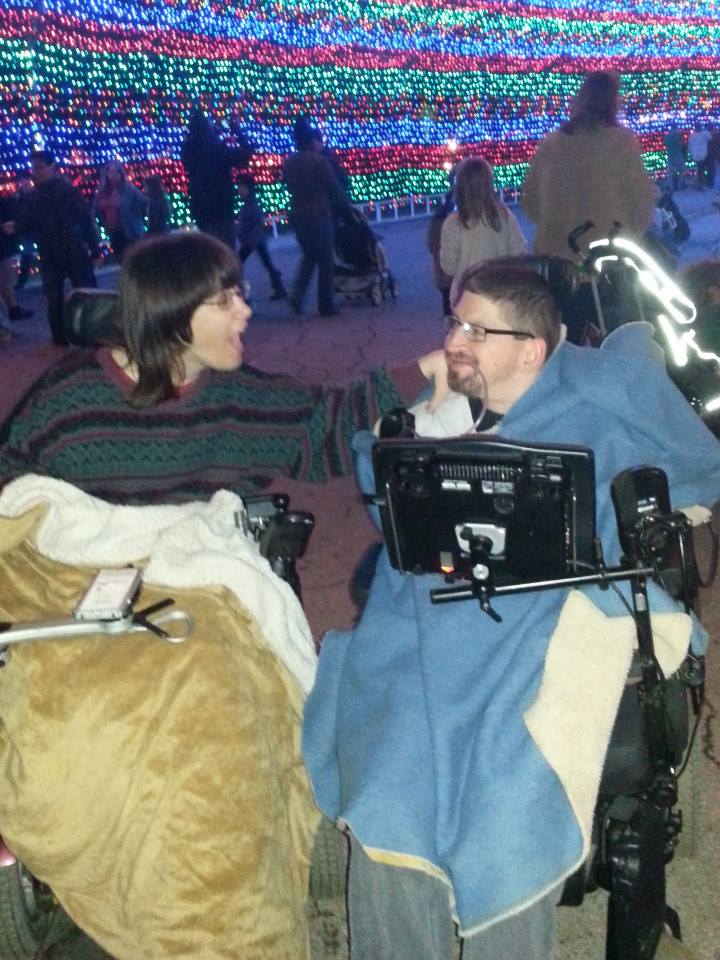 In 1996, I had been out of college for about two years. I met my future wife Kate at the Pittsburgh Employment Conference (PEC) for augmentative communicators. The conference was for individuals who use communication devices. I was from Ohio and she was from Texas. Our eyes met and we just knew, it was love at first sight. But unfortunately Kate was in a relationship, so I had to hold back my feelings. We spent our time together throughout the conference and even took a romantic stroll at the hotel to see the fireworks over the city. We almost kissed that night, but our feelings had to remain unrevealed for the time being.

Throughout the years, Kate and I talked via AOL instant messenger, and we saw each other again at the same employment conference during the following years, and remained in contact. In those following years, I had a lot of girlfriends but I never thought any of them were the one. I began to think that I would never find the right person for me. However, one day in 2011, Kate wrote to me on Facebook and said she had left her husband, and gave me her phone number. I could not believe it and said myself, “What the hell?”

I texted her right away and we finally revealed our feelings for each other that were denied all those years ago. Kate asked me to come to Texas and visit, but I had my reservations and was very skeptical. I always had feelings for Kate but I was nervous that she wouldn’t like me anymore, and my confidence was not what it was because of so many failures in romantic relationships, in the preceding years. I decided not to go and we stopped communicating.

About a month after losing contact, I had a dream of Kate and I sitting on a couch and we were so happy together. So I reached out to Kate via text and told her about the dream I had. It was the summer of 2011, and we had a lot going on including the same conference in Pittsburgh. So we decided to have a date at the conference. We had a wonderful dinner at Joe’s Crab Shack. After dinner we went off alone and we finally got that long awaited kiss.

Fireworks went off, the symphony started to play and lightning struck, when we kissed. I knew right then I wanted to be with Kate, and she felt the same way!!! That kiss was the change I had been looking for and completely changed the path I thought my life would take. I was finally with my true love and we not just wanted to be together we needed to be together. The journey was slow at first and I returned to Ohio, and Kate returned to Texas. Over the next few months our relationship grew, we could not to bear being apart. After some deep conversations with my family, friends and Kate; I decided to move to Austin.

Every August 4th we go to Joe’s Crab Shack to celebrate our anniversary … and the rest is history.