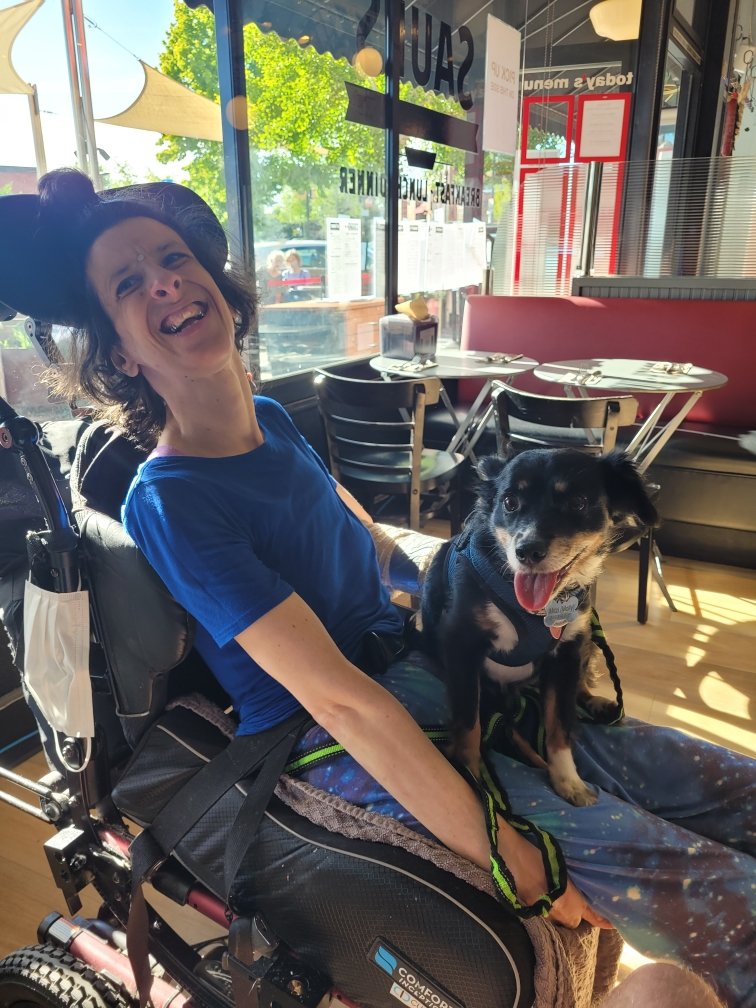 In foreign language classrooms or study groups, I found allies among the natural communicators. They were interested in my modes of communication. Minspeak, my communication device's vocabulary system, sparked their interest. They approached my natural speech as an accent. Conversation across digital and spoken speech, in multiple languages just flowed. We exchanged creative pro tips for studying, based on the features of my communication technology. Feeling at home in foreign language groups led me to join more, becoming a polyglot.

The public school district provided me with a communication device built for speaking Spanish. Many learners now set their social media accounts to present the pages in their target language for practice. Twenty years ago, I learned to navigate the menus in Spanish. I was operating the device in another language, like I manage my social media accounts today. The device that spoke Spanish came with an overlay with picture-based icons pre-labeled. The pictures above the terms in Spanish made the practice of putting Post-Its on household items immersive. The screen was mounted in front of me, so that I had a round-the-clock exposure to the words in Spanish under the pictures. The overlay taught me the parts of speech in Spanish, as they are standard landmarks in a sequence of icons for conjugating verbs, for example. This gave me linguistic appreciation when we began to diagram sentences. I brought this communication device on the study abroad exchange. It was equipped to speak in Spanish, matching accents.

I started studying endangered languages with speaking groups, and with reading circles. At that time, there wasn't the demand to build high tech communication devices in these target languages. Recalling the device built for Spanish, I adapted my own. I could relabel the icons with the most complex forms of the noun. I could memorize its spelling. It did not make sense to transliterate text in these languages for a machine with an English speaking voice to pronounce. The technology could be programmed with alternative pronunciations, but it was not equipped for these letter blends. My device crashed while attempting to speak this language!

Teamwork offered opportunities: I could master spelling in the target language. Other students would take turns reading my text off the screen, while practicing speaking. Interactions blossomed. When a beginning student asked me for help with a word, I would show them the spelling before they heard it pronounced. Visualizing the word before hearing it could help them learn the spelling conventions. I shared my shorthand for taking notes, using punctuation marks that came with my device. The exclamation mark added to the end of a verb meant that it was a command. "Read!" would be an example of a command rendered from my digital notes.

As with the Spanish speech device, linguistics overlap between the language of Minspeak and the target language. We progressed into diagramming literature as we translated, spot reading for parts of speech. I had been looking at Minspeak overlays that color coded parts of speech, all my life. I showed the class my display, recommending they use color highlighters on a passage of text for ease of reference. I had been diagraming my own writing all along.

I dabbled with languages that use different alphabets. In Hebrew, the characters' phonetics closely correspond with the English letters' sound. It worked for my purpose to take notes using the Roman Alphabet. Three or four capitalized letters could indicate the root of a word.

Technology evolves. The next step in my journey would be to learn languages with vertical writing scripts. Apps like SymboTalk - AAC Talk made by iAccessibility, allow for customized characters. Learners could operate the app in a communication device's Windows mode. The word processing mode would dedicate the length of the screen for vertical writing. In this global village, mainstream technology, like the iPhone, comes ready to speak in other languages. The hardware may have to be adapted, but the software is there. This could translate to a download of an app into an accessible device.

This is so interesting. I, personally, would love to see AAC offered in school as a second language!